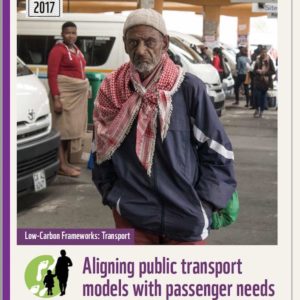 Although this publication focuses on Bus Rapid Transit (BRT) interventions in South Africa, it does not look specifically at (proposed) alternatives to BRT systems, or critique the impact of these systems as a whole.

Instead, it considers in brief the way in which two major metros in South Africa (Johannesburg and Cape Town) have revised their initial full-specification BRT interventions in response to clearer insights about user preferences and stated needs, of which the most commonly one is affordability. We believe that these lessons are valuable for other metros and larger towns in sub-Saharan Africa, and developing cities worldwide.