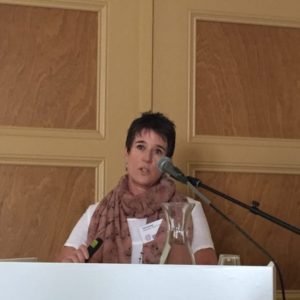 This research, prepared for the Scientists for Cycling Colloquium, Velo-City, 12 June 2017, Arnhem-Nijmegen, Netherlands, asks whether this poor implementation, road safety, and inability to shift cycling behaviour, above, is partially a consequence of the ambivalent policy and political discourse. It reflects on one aspect of a larger body of ongoing research, which examines the broader narratives and perceptions about utility cycling in South Africa since 1994, and considers the relationship between the public discourse, policy implementation, and personal cycling practice.

A spoke in the wheel? Reflections on the implications of South Africa’s conflicted bicycling discourse

‘Cycling changed my life. I am free. I am independent’. Rufus Norexe, bicycle commuter, Cape Town, 2007

‘We won’t build bicycle lanes when people live in shacks.’ …’You must be ashamed that you want bicycle lanes when there are people without flushing toilets…’ Julius Malema, leader, Economic Freedom Fighters, Election Manifesto, Johannesburg, 30 April 2016

With the implementation of its first Public Transport Action Plan (NDoT, 2007), post-apartheid South African transport policy began formally planning for and promoting walking and utility cycling (referred to in SA policy and here as NMT, or Non-Motorised Transport[1]). Although these policies explicitly employ the language of equity, poverty alleviation and the reversal of apartheid-era mobility constraints (NDoT, 2008) to make the case for bicycle transport, a concurrent political narrative exists, within the same governance structures, that only ‘a loser’ would travel by bicycle[2], and that ‘having a car is freedom.’[3]

Yet while South Africa publishes a significant number of bicycle policies, guidelines, regulations and strategies, and requires a high level of NMT planning from provinces and local authorities (NLTA, 2009), roads are inordinately dangerous for vulnerable road users (UNEP, 2016; WHO, 2015). Bicycle mode share remains low (Jennings, 2015) and relatively unchanging at between 0.2-1% of trips over a decade (TCT, 2015). Infrastructure is largely non-existent or of poor quality (Baufeldt, 2016), and behaviour change programmes are allocated few resources and given little policy attention (Jennings et al, 2017).

Purpose of this abstract

This extended abstract asks whether this poor implementation, road safety, and inability to shift cycling behaviour, above, is partially a consequence of the ambivalent policy and political discourse. It reflects on one aspect of a larger body of ongoing research, which examines the broader narratives and perceptions about utility cycling in South Africa since 1994, and considers the relationship between the public discourse, policy implementation, and personal cycling practice.

This research uses critical discourse analysis (using a dataset of media, policy and other public discourse since 1994) and biographical narratives (one-on-one interviews), and draws on insights from a range of literature, such as practice theory and theories of personal behaviour change.

Bicycle transport certainly makes sense to visiting researchers: ‘In a city [Johannesburg] of 10 million designed around the car – but where most can’t afford one – could bicycles be the answer?’ wrote Guardian Cities editor Nick Mead[4] (2016), who observed that while ‘the legacy of apartheid planning makes change difficult… cyclists … have the mayor’s[5] support.’ He notes, almost as an aside, that these cyclists, from poor, peripheral areas of the city, are ‘nearly all … from Malawi, Mozambique, Zambia or Zimbabwe, importing bike culture from countries where cycling has been less stigmatised’.[6]

To make cycling ‘irresistible’ requires political will, as well as infrastructure and extensive complementary behavioural and spatial interventions (Buehler & Pucher, 2012; Pucher et al 2010). Without political will, the latter interventions are unlikely to follow. Choices, attitudes, identities and lifestyle meanings also play an important role in influencing transport choices (Steinbach et al, 2011; Moser & Bamberg, 2008), including identities associated with cycling, such as autonomy and efficiency. Aldred & Jungnickel (2014) posit that to shift cycling practices, in addition to focusing on infrastructure, bicycle promotion would do well to consider the narratives around transport choice.

The political support for bicycle transport to which Mead refers, above, is transient and ambivalent. While activist events employ the bicycle as a metaphor for freedom[7], the transport ministry frames ‘having a car [as] freedom’. Cycling is something users do only when unable to afford anything else (NDoT, 2008; PGWC, 2009). When framed as a mode well-suited to the poor, utility cycling loses its aspirational appeal (Mashiri et al, 2013). Yet in a simultaneous but conflicting narrative (by the same political organisation that drafted the country’s commitments to utility cycling), it is rejected as a mode favoured by the privileged among their many alternatives (Jennings 2014; 2016).

[Bicycle lanes] ‘are a great gimmick for the wealthy, while the poor have to hang outside on trains’ [8]

This is not a challenge unique to South Africa. In the United States, bicycle transport as a pro-poor opportunity suffers because it is associated with elite, privileged ‘sustainability practices’ and the gentrification of bike-friendly neighbourhoods (Lubitow & Miller, 2013; Hoffman, 2016; Golub et al 2016). Steinbach et al (2011) suggest that in London, because cycling is associated largely with professional (white) men and women, those with other class, gendered and ethnic identities find the mode, and what it symbolises, less appealing.

The high-status of cycling doesn’t not necessarily increase the ‘value’ of the mode, however; instead, it can symbolise inequitable distribution of resources, continued oppression, and disenfranchisement (Irlam, 2016). Economic Freedom Fighters (EFF) leader Julius Malema, when launching his election manifesto in April 2016[9], included a promise that:

‘We won’t build bicycle lanes when people live in shacks’.

‘Why do people demand cycling lanes when there is no cycling culture in SA? You must be ashamed that you want bicycling lanes when there are people who [are] without flushing toilets,’ Malema told a media briefing[10] in June 2016. ‘We are taking the bicycle lanes; we are going to give the people of [low-income area in Johannesburg] Alexandra water‚ the money is there … I want the white people of Sandton to fight and say “this government is taking away from us”.’

South Africa is not alone in struggling to increase bicycle mode share (see for example Handy et al, 2014; and Steinbach et al, 2011). However, this country has a particular history of social control by means of mobility constraint, limited alternatives, and spatial segregation (Jennings, 2016). Thus the narratives of freedom, constraint, choice and deprivation, are likely to have considerable resonance with both policy implementers and potential users.

The political landscape in South Africa wavers between support, ambivalence or overt hostility to utility cycling. The promotion of bicycle facilities, even for the poor, can be seen to be at the expense of other, more important services, such as water, sanitation and housing. What was in the pre-private vehicle era an object of white racial identity and high social standing in South Africa (Morgan, 2016), bicycles now straddle a peculiar position, serving as symbol of both privilege and poverty, of freedom and of continued oppression.

These dissonant political narratives are likely to have important implications for the depth and commitment to implementing and promoting utility cycling, and may influence the motivation to adopt cycling as a transport mode. Further research will investigate the extent to which this is the case.

R Aldred and K Jungnickel, ‘Why culture matters for transport policy: the case for cycling in the UK’, Journal of Transport Geography 14, p. 78-87, 2014.

[1] We are aware of the debate regarding the car-centric term NMT (rather than ‘active mobility’). However, within the context of mobility in African cities, we prefer the term NMT, despite its inadequacies, as we recognize the key difference between captive and choice NMT users in developing and developed cities; largely, people who walk and cycle in developing world cities do not choose to do for exercise or for health purposes, but primarily as transport, in the face of few alternatives. Cycling is already problematically seen as a sport (ie, active) and not a legitimate transport mode.. Further, cycling is proposed as a key way in which to reduce the amount of activity among the transport disadvantaged, in a shift from walking (sometimes 20 km per trip) to cycling.

[2] Interview with the then City of Johannesburg mayor Amos Masondo (African National Congress), and at that time head of ICLEI (local governments for sustainability), 2006)

[9] The August 2016 local government elections returned semi-coalition governments in the major metros, between the Democratic Alliance and the EFF